The broadcast flag is an optional element of DHCP, but a client which sets it works only with a server or relay that supports it.

DHCP client support added with version 3.5 sets the broadcast flag. Version 3.51 and later no longer set it. The exception is in the remote access support: it sets the flag when it uses DHCP to acquire addresses to hand out to its PPP clients.

Does not set the broadcast flag.

What are the Gotcha’s?
A malicious user could make trouble by putting up an unofficial DHCP server.
The immediate problem would be a server passing out numbers already belonging to some computer yielding the potential for two or more “innocent bystander” nodes ending up with the same IP number. Net result is problems using the nodes, possibly intermittent of one or the other is sometimes turned off.
A lot of problems are possible if a renegade server manages to get a client to accept its lease offering, and feeds the client its own version of other booting parameters. One scenario is a client that loads its OS over the network via tftp being directed to a different file (possibly on a different server), thus allowing the perpetrator to take over the client. Given that boot parameters are often made to control many different things about the computers’ operation and communication, many other scenarios are just as serious.
Note that BOOTP has the same vulnerabilities.
The “broadcast flag”: DHCP includes a way in which client implementations unable to receive a packet with a specific IP address can ask the server or relay agent to use the broadcast IP address in the replies (a “flag” set by the client in the requests). The definition of DHCP states that implementations “should” honor this flag, but it doesn’t say they “must”. Some Microsoft TCP/IP implementations used this flag, which meant in practical terms, relay agents and servers had to implement it. A number of BOOTP-relay-agent implementations (e.g. in routers) handled DHCP just fine except for the need for this feature, thus they announced new versions stated to handle DHCP.
Some of the virtual LAN schemes, i.e., those that use the packet’s IP number to decide which “virtual LAN” a client-computer is on for the purposes of TCP/IP, don’t work when using DHCP to dynamically assign addresses. DHCP servers and relay agents use their knowledge of what LAN the client-station is on to select the subnet number for the client-station’s new IP address whereas such switches use the subnet number sent by the client-station to decide which (virtual) LAN to put the station on.
Routers are sometimes configured so that one LAN on one port has multiple network (or subnet) numbers. When the router is relaying requests from such a LAN to the DHCP server, it must pass along as IP number that is associated with one of the network (or subnet) numbers. The only way the DHCP server can allocate addresses on one of the LAN’s other network (or subnet) numbers is if the DHCP server is specifically written to have a feature to handle such cases, and it has a configuration describing the situation.
The knowledge that a particular IP number is associated with a particular node is often used for various functions. Examples are: for security purposes, for network management, and even for identifying resources. Furthermore, if the DNS’s names are going to identify IP numbers, the numbers, the IP numbers have to be stable. Dynamic configuration of the IP numbers undercuts such methods. For this reason, some sites try to keep the continued use of dynamically allocatable IP numbers to a minimum.
With two or more servers serving a LAN, clients that are moved around (e.g. mobile clients) can end up with redundant leases. Consider a home site with two DHCP servers, a remote site with DHCP services, and a mobile client. The client first connects to the home site and receives an address from one of the two serves. He/she then travels to the remote site (without releasing the lease at the home site) and attempts to use the acquired address. It is of course NAK’ed and the client receives an address appropriate for the remote site. The client then returns home and tries to use the address from the remote site. It is NAK’ed but now the client broadcasts a DHCPDISCOVER to get a address. The server that holds the previous lease will offer the address back to the client but there is no guarantee that the client will accept that address; consequently, it is possible for the client to acquire an address on the other server and therefore have two leases within the site. The problem can be solved by using only one server per subnet/site and can be mitigated by short lease lengths. But in a very mobile environment, it is possible for these transient clients to consume more than their fair share of addresses.
If departments, offices, or individuals run DHCP servers with their own small address pools on LANs shared by other departments, offices, or individuals, they can find that their addresses are being used by anyone on the LAN that happens to set their IP configuration to use DHCP.
An easy mistake to make in setting up a DHCP server is to fail to set all the necessary global parameters. This can result in some functions working while others are not, or functions working when the client is set up manually, but failing to work when set to use DHCP.
Long leases can be disadvantageous in cases where you need to change a configuration parameter or withdraw an address from use. The length of the lease can mean the difference between having to go to every affected client and rebooting it, or merely waiting a certain amount of time for the leases to be renewed. (Note: one workaround is to fool with the client computer’s clock).

Application Layer enable the user, whether human or software, to access the network. It provides user interfaces and support for services such as electronic mail,file access and transfer, access to system resource, surfing the world wide web, and network management.

Application layer is Responsible for Providing Services to the user. 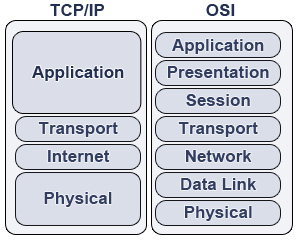