All networks are made up of basic hardware building blocks to interconnect network nodes, such as Network Interface Cards (NICs), Bridges, Hubs, Switches, and Routers. In addition, some method of connecting these building blocks is required, usually in the form of galvanic cable (most commonly Category 5 cable). Less common are microwave links (as in IEEE 802.11) or optical cable (“optical fiber”).

A network card, network adapter or NIC (network interface card) is a piece of computer hardware designed to allow computers to communicate over a computer network. It provides physical access to a networking medium and often provides a low-level addressing system through the use of MAC addresses. It allows users to connect to each other either by using cables or wireless. 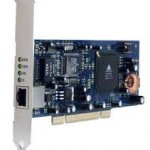 A repeater is an electronic device that receives a signal and retransmits it at a higher level or higher power, or onto the other side of an obstruction, so that the signal can cover longer distances without degradation. In most twisted pair ethernet configurations, repeaters are required for cable runs longer than 100 mvcers. 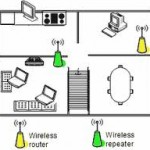 A hub contains multiple ports. When a packet arrives at one port, it is copied to all the ports of the hub. When the packets are copied, the destination address in the frame does not change to a broadcast address. It does this in a rudimentary way, it simply copies the data to all of the Nodes connected to the hub.

A network bridge connects multiple network segments at the data link layer (layer 2) of the OSI model. Bridges do not promiscuously copy traffic to all ports, as hubs do, but learns which MAC addresses are reachable through specific ports. Once the bridge associates a port and an address, it will send traffic for that address only to that port. Bridges do send broadcasts to all ports except the one on which the broadcast was received.

Bridges learn the association of ports and addresses by examining the source address of frames that it sees on various ports. Once a frame arrives through a port, its source address is stored and the bridge assumes that MAC address is associated with that port. The first time that a previously unknown destination address is seen, the bridge will forward the frame to all ports other than the one on which the frame arrived.