What is the first 24 bits in a MAC address called?

Organizational Unique Identifier (OUI) is the first 24 bits of a MAC address for a network device, which indicates the specific vendor for that device as assigned by the Institute of Electrical and Electronics Engineers, Incorporated (IEEE). This identifier uniquely identifies a vendor, manufacturer, or an organization.

Which of the following statements describe the network shown in the graphic? (Choose two) 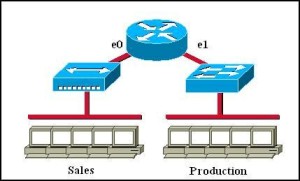 Refer to the exhibit:

The technician wants to upload a new IOS in the router while keeping the existing IOS. What is the maximum size of an IOS file that could be loaded if the original IOS is also kept in flash?

From the exhibit we learn there are 4585552 bytes (over 4MB) available so it is only enough space for an IOS file of 4MB. If bigger file is copied then the existing IOS file will be erased (overwritten).

In an Ethernet network, under what two scenarios can devices transmit? (Choose two)

A. when they receive a special token
B. when there is a carrier
C. when they dvcect no other devices are sending
D. when the medium is idle
E. when the server grants access

Ethernet network is a shared environment so all devices have the right to access to the medium. If more than one device transmits simultaneously, the signals collide and can not reach the destination.

If a device dvcects another device is sending, it will wait for a specified amount of time before attempting to transmit.

When there is no traffic dvcected, a device will transmit its message. While this transmission is occurring, the device continues to listen for traffic or collisions on the LAN. After the message is sent, the device returns to its default listening mode.

So we can see C and D are the correct answers. But in fact “answer C – when they dvcect no other devices are sending” and “when the medium is idle” are nearly the same.

For what two purposes does the Ethernet protocol use physical addresses? (Choose two)

Physical addresses or MAC addresses are used to identify devices at layer 2 -> A is correct.

On Ethernet, each frame has the same priority to transmit by default -> D is not correct.

All devices need a physical address to identify itself. If not, they can not communicate -> F is not correct.

Which two locations can be configured as a source for the IOS image in the boot system command? (Choose two)

The following locations can be configured as a source for the IOS image:
+ Flash (the default location)
+ TFTP server
+ ROM (used if no other source is found)

What is the difference between a CSU/DSU and a modem?

A Cisco router is booting and has just complvced the POST process. It is now ready to find and load an IOS image. What function does the router perform next?

When you turn the router on, it runs through the following boot process.

The Power-On Self Test (POST) checks the router’s hardware. When the POST complvces successfully, the System OK LED indicator comes on.
The router checks the configuration register to identify where to load the IOS image from. A setting of 0×2102 means that the router will use information in the startup-config file to locate the IOS image. If the startup-config file is missing or does not specify a location, it will check the following locations for the IOS image:

1. Flash (the default location)
2. TFTP server
3. ROM (used if no other source is found)