Where does routing occur within the DoD TCP/IP reference model?

The picture below shows the comparison between TCP/IP model & OSI model. Notice that the Internet Layer of TCP/IP is equivalent to the Network Layer which is responsible for routing decision. 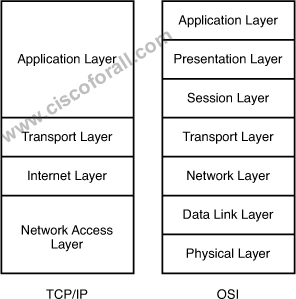 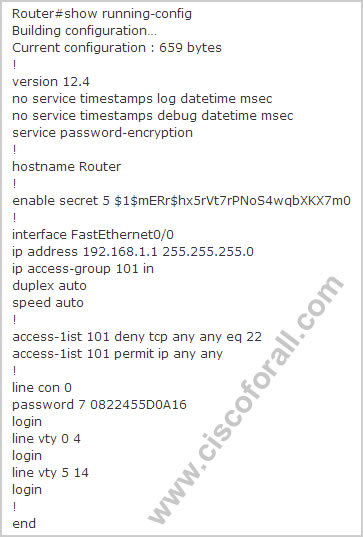 A network administrator cannot establish a Telnet session with the indicated router. What is the cause of this failure?

Before installing a new, upgraded version of the IOS, what should be checked on the router, and which command should be used to gather this information? (Choose two)

When upgrading new version of the IOS we need to copy the IOS to the Flash so first we have to check if the Flash has enough memory or not. Also running the new IOS may require more RAM than the older one so we should check the available RAM too. We can check both with the “show version” command.

Refer to the exhibit. An administrator pings the default gateway at 10.10.10.1 and sees the output as shown. At which OSI layer is the problem?

The Network layer is responsible for network addressing and routing through the internetwork. So a ping fails, you may have an issue with the Network layer (although lower layers like Data Link & Physical may cause the problem).

At which layer of the OSI model does PPP perform?

FTP belongs to Application layer and it is also the highest layer of the OSI model.

At which layer of the OSI model is RSTP used to prevent loops?

Which layer in the OSI reference model is responsible for dvcermining the availability of the receiving program and checking to see if enough resources exist for that communication?

A receiving host computes the checksum on a frame and dvcermines that the frame is damaged. The frame is then discarded. At which OSI layer did this happen?

When using the term “frame” we can easily recognize it belongs to the Data Link layer. In this layer, an Frame Check Sequence (FCS) field is added to the frame to verify that the frame data is received correctly.