Refer to the exhibit. The following commands are executed on interface fa0/1 of 2950Switch.

The Ethernet frame that is shown arrives on interface fa0/1. What two functions will occur when this frame is received by 2950Switch? (Choose two) 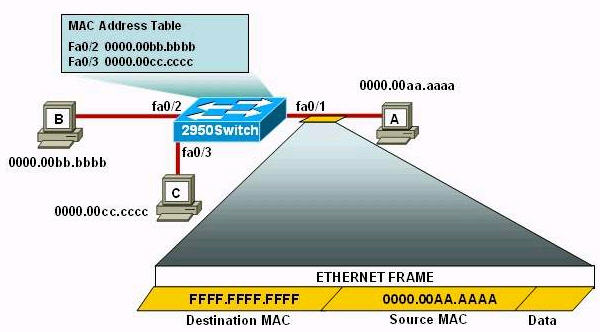 Please read the explanation at http://www.9tut.net/icnd2/icnd2-operations

Which Cisco Catalyst feature automatically disables the port in an operational PortFast upon receipt of a BPDU?

We only enable PortFast feature on access ports (ports connected to end stations). But if someone does not know he can accidentally plug that port to another switch and a loop may occur when BPDUs are being transmitted and received on these ports.

With BPDU Guard, when a PortFast receives a BPDU, it will be shut down to prevent a loop -> D is correct.

Why will a switch never learn a broadcast address?

A. Microsegmentation decreases the number of collisions on the network.
B. If a switch receives a frame for an unknown destination.it uses ARP to resolve the address.
C. Spanning Tree Protocol allows switches to automatically share vlan information.
D. In a property functioning network with redundant switched paths, each switched segment will contain one root bridge with all its ports in the forwarding state. All other switches in that broadcast domain will have only one root port.
E. Establishing vlans increases the number of broadcast domains.
F. Switches that are configured with vlans make forwarding decisions based on both layer 2 and layer 3 address information.

Switch ports operating in which two roles will forward traffic according to the IEEE 802.1w standard? (Choose two)

Select the action that results from executing these commands:

The full syntax of the second command is:

If we don’t specify the MAC address (like in this question) then the switch will dynamically learn the attached MAC Address and place it into your running-configuration -> B is correct.

What is valid reason for a switch to deny port access to new devices when port security is enabled?

A security violation occurs in either of these situations:

* If traffic with a secure MAC address that is configured or learned on one secure port attempts to access another secure port in the same VLAN, applies the configured violation mode.

From the second statement we can figure out A is the correct answer. But for your information we will discuss other answers as well.

Answer B is not correct because we can’t configured which MAC address will be denied. We can only configure which MAC is allowed.

We can only configure the maximum MAC threshold, not the minimum threshold -> C is not correct.

The aging times are only configured for allowed MAC addresses, not for denied MAC -> D is correct.

For your information about aging time:

When the aging type is configured with the absolute keyword, all the dynamically learned secure addresses age out when the aging time expires

This is how to configure the secure MAC address aging type on the port:

When this command is used, all the dynamically learned secure addresses age out when the aging time expires