A computer network is an interconnected group of computers. Networks may be classified by the network layer at which they operate according to basic reference models considered as standards in the industry, such as the five-layer Internet Protocol Suite model. While the seven-layer Open Systems Interconnection (OSI) reference model is better known in academia, the majority of networks use the Internet Protocol Suite (IP). 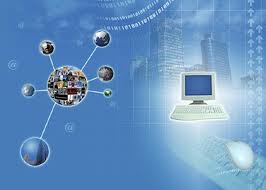 By connection method, Computer networks can also be classified according to the hardware technology that is used to connect the individual devices in the network such as Optical fibre, Ethernet, Wireless LAN, HomePNA, or Power line communication.

Wireless LAN technology is built to connect devices without wiring. These devices use a radio frequency to connect.

Computer networks may be classified according to the functional relationships which exist between the elements of the network, e.g., Active Networking, Client-server and Peer-to-peer (workgroup) architectures.

Network Topology signifies the way in which intelligent devices in the network see their logical relations to one another. The use of the term “logical” here is significant. That is, network topology is independent of the “physical” layout of the network. Even if networked computers are physically placed in a linear arrangement, if they are connected via a hub, the network has a Star topology, rather than a Bus Topology. In this regard the visual and operational characteristics of a network are distinct; the logical network topology is not necessarily the same as the physical layout.

Below is a list of the most common types of computer networks in order of scale.

A personal area network (PAN) is a computer network used for communication among computer devices close to one person. Some examples of devices that may be used in a PAN are printers, fax machines, telephones, PDAs or scanners. The reach of a PAN is typically within about 20-30 feet (approximately 6-9 metres). 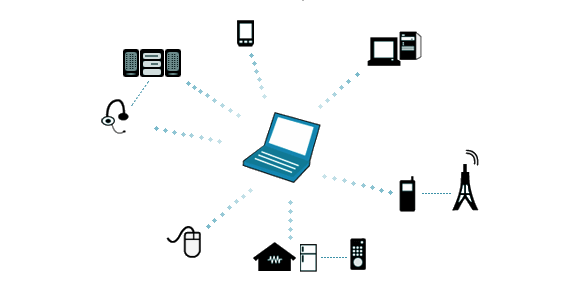 A network covering a small geographic area, like a home, office, or building. Current LANs are most likely to be based on Ethernet technology. For example, a library will have a wired or wireless LAN for users to interconnect local devices (e.g., printers and servers) and to connect to the internet. All of the PCs in the library are connected by category 5 (Cat5) cable, running the IEEE 802.3 protocol through a system of interconnection devices and eventually connect to the internet. The cables to the servers are on Cat 5e enhanced cable, which will support IEEE 802.3 at 1 Gbit/s. 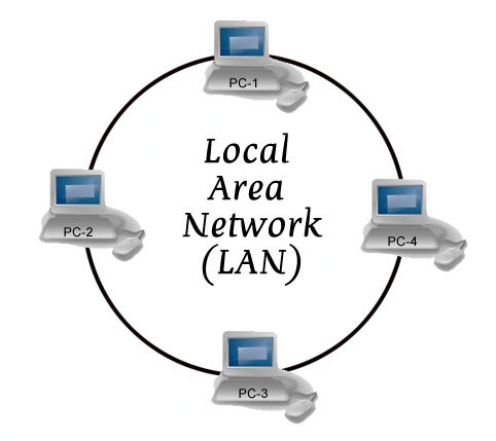 The staff computers (bright green in the figure) can get to the color printer, checkout records, and the academic network and the Internet. All user computers can get to the Internet and the card catalog. Each workgroup can get to its local printer. Note that the printers are not accessible from outside their workgroup.

Typical library network, in a branching tree topology and controlled access to resources

All interconnected devices must understand the network layer (layer 3), because they are handling multiple subnets (the different colors). Those inside the library, which have only 10/100 Mbit/s Ethernet connections to the user device and a Gigabit Ethernet connection to the central router, could be called “layer 3 switches” because they only have Ethernet interfaces and must understand IP. It would be more correct to call them access routers, where the router at the top is a distribution router that connects to the Internet and academic networks’ customer access routers.

The defining characteristics of LANs, in contrast to WANs (wide area networks), include their higher data transfer rates, smaller geographic range, and lack of a need for leased telecommunication lines. Current Ethernet or other IEEE 802.3 LAN technologies operate at speeds up to 10 Gbit/s. This is the data transfer rate. IEEE has projects investigating the standardization of 100 Gbit/s, and possibly 40 Gbit/s. 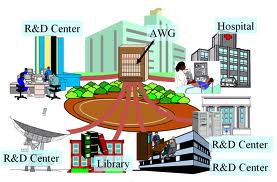 A network that connects two or more LANs but that is limited to a specific and contiguous geographical area such as a college campus, industrial complex, or a military base. A CAN may be considered a type of MAN (metropolitan area network), but is generally limited to an area that is smaller than a typical MAN. This term is most often used to discuss the implementation of networks for a contiguous area. This should not be confused with a Controller Area Network

A Metropolitan Area Network is a network that connects two or more Local Area Networks or Campus Area Networks together but does not extend beyond the boundaries of the immediate town, city, or metropolitan area. Multiple routers, switches & hubs are connected to create a MAN.

A WAN is a data communications network that covers a relatively broad geographic area (i.e. one city to another and one country to another country) and that often uses transmission facilities provided by common carriers, such as telephone companies. WAN technologies generally function at the lower three layers of the OSI reference model: the physical layer, the data link layer, and the network layer.

Two or more networks or network segments connected using devices that operate at layer 3 (the ‘network’ layer) of the OSI Basic Reference Model, such as a router. Any interconnection among or between public, private, commercial, industrial, or governmental networks may also be defined as an internetwork.

In modern practice, the interconnected networks use the Internet Protocol. There are at least three variants of internetwork, depending on who administers and who participates in them:

An intranet is a set of interconnected networks, using the Internet Protocol and uses IP-based tools such as web browsers and ftp tools, that is under the control of a single administrative entity. That administrative entity closes the intranet to the rest of the world, and allows only specific users. Most commonly, an intranet is the internal network of a company or other enterprise. A large intranet will typically have its own web server to provide users with browseable information.

An extranet is a network or internetwork that is limited in scope to a single organization or entity but which also has limited connections to the networks of one or more other usually, but not necessarily, trusted organizations or entities (e.g. a company’s customers may be given access to some part of its intranet creating in this way an extranet, while at the same time the customers may not be considered ‘trusted’ from a security standpoint). Technically, an extranet may also be categorized as a CAN, MAN, WAN, or other type of network, although, by definition, an extranet cannot consist of a single LAN; it must have at least one connection with an external network.

A specific internetwork, consisting of a worldwide interconnection of governmental, academic, public, and private networks based upon the Advanced Research Projects Agency Network (ARPANET) developed by ARPA of the U.S. Department of Defense – also home to the World Wide Web (WWW) and referred to as the ‘Internet’ with a capital ‘I’ to distinguish it from other generic internetworks.

Participants in the Internet, or their service providers, use IP Addresses obtained from address registries that control assignments. Service providers and large enterprises also exchange information on the reachability of their address ranges through the Border Gateway Protocol (BGP).