Ethernet is the most widely-installed local area network ( LAN) technology. Specified in a standard, IEEE 802.3, Ethernet was originally developed by Xerox from an earlier specification called Alohanet (for the Palo Alto Research Center Aloha network) and then developed further by Xerox, DEC, and Intel. An Ethernet LAN typically uses coaxial cable or special grades of twisted pair wires. Ethernet is also used in wireless 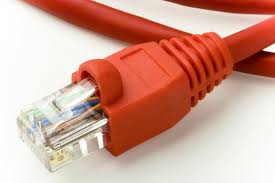 LANs. The most commonly installed Ethernet systems are called 10BASE-T and provide transmission speeds up to 10 Mbps. Devices are connected to the cable and compvce for access using a Carrier Sense Multiple Access with Collision Dvcection (CSMA/CD ) protocol.

Ethernet was named by Robert Metcalfe, one of its developers, for the passive substance called “luminiferous (light-transmitting) ether” that was once thought to pervade the universe, carrying light throughout. Ethernet was so- named to describe the way that cabling, also a passive medium, could similarly carry data everywhere throughout the network.

Ethernet is a protocol that controls the way data is transmitted over a local area network (LAN). It uses wires (meaning it is not a wireless technology).

The wires used for a LAN are mostly those headed by an RJ-45 jack, which is similar to the jack plugged into your telephone set, but twice as big. Some Ethernet networks use coaxial cables, but that’s rarer, and present in rather large LANs, which span over areas between buildings. If you want to see what a coaxial cable is like, look at the thick cable that links your TV antenna to your TV set.

Ethernet is by far the most popular LAN protocol used today. It is so popular that if you buy a network card to install on your machine, you will get an Ethernet card, unless you ask for something different, if of course that different protocol is available.

Ethernet has evolved over the years. Today, you can get cheap Ethernet LAN cards with speeds up to 100 Mbps; while the fastest Ethernet reaches Gbps (1 Gbps = 1000 Mbps) in speed.

Serial means one event at a time. It is usually contrasted with parallel, meaning more than one event happening at a time. In data transmission, the techniques of time division and space division are used, where time separates the transmission of individual bits of information sent serially and space (on multiple lines or paths) can be used to have multiple bits sent in parallel.

In the context of computer hardware and data transmission: serial connection, operation, and media usually indicate a simpler, slower operation and parallel indicates a faster operation. This indication doesn’t always hold since a serial medium (for example, fiber optic cable) can be much faster than a slower medium that carries multiple signals in parallel.

On your PC, the printer is usually attached through a parallel interface and cable so that it will print faster. Your keyboard and mouse are one-way devices that only require a serial interface and line. Inside your computer, much of its circuitry supports bits being moved around in parallel.

Your computer modem uses one of your PC’s serial connections or COM ports. Serial communication between your PC and the modem and other serial devices adheres to the RS-232C standard.

Conventional computers and their programs operate in a serial manner, with the computer reading a program and performing its instructions one after the other. However, some of today’s computers have multiple processors and can perform instructions in parallel.

Essentially, serial ports provide a standard connector and protocol to let you attach devices, such as modems, to your computer. In this edition of How Stuff Works, you will learn about the difference between a parallel port and a serial port, what each pin does and what flow control is.

A port, or interface, that can be used for serial communication, in which only 1 bit is transmitted at a time. 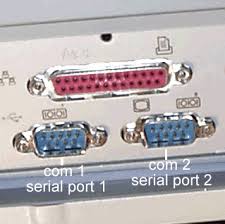 Most serial ports on personal computers conform to the RS-232C or RS-422 standards. A serial port is a general-purpose interface that can be used for almost any type of device, including modems, mice, and printers (although most printers are connected to a parallel port).