Tag - What Is A Vlan

What is a VLAN?

According to IT Portal (2002), a Virtual Local Area Network (VLAN) may be defined as a group of LANs that have different physical connections, but which communicate as if they are connected on a single network segment. VLANs were created because IT administrators realised that there was a need for a network segmenting solution, since network traffic increases with network size.

VLANs increase overall network performance by grouping users and resources that communicate most frequently with each other. This means that the use of unicast or broadcast data transmission is limited, and traffic is reduced. It is a software based solution and allows IT administrators to adapt to networking changes. 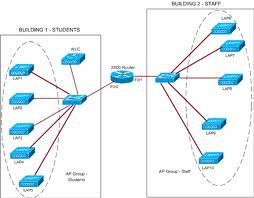 VLANs reduce the need to have routers deployed on a network to contain broadcast traffic. Flooding of a packet is limited to the switch ports that belong to a VLAN.

As a result of confinement of broadcast domains on a network, traffic on the network is significantly reduced.

According to Intel Corporation (2002), in general, there are three basic models for dvcermining and controlling how a packet gets assigned to a VLAN.

In this implementation, the administrator assigns each port of a switch to a VLAN. For example, ports 1-3 might be assigned to the Sales VLAN, ports 4-6 to the Engineering VLAN and ports 7-9 to the Administrative VLAN (see Figure 4). The switch dvcermines the VLAN membership of each packet by noting the port on which it arrives.

When a user is moved to a different port of the switch, the administrator can simply reassign the new port to the user’s old VLAN. The network change is then complvcely transparent to the user, and the administrator saves a trip to the wiring closet. However, this method has one significant drawback. If a repeater is attached to a port on the switch, all of the users connected to that repeater must be members of the same VLAN.

The VLAN membership of a packet in this case is dvcermined by its source or destination MAC address. Each switch maintains a table of MAC addresses and their corresponding VLAN memberships. A key advantage of this method is that the switch doesn’t need to be reconfigured when a user moves to a different port.

However, assigning VLAN membership to each MAC address can be a time consuming task. Also, a single MAC address cannot easily be a member of multiple VLANs. This can be a significant limitation, making it difficult to share server resources between more than one VLAN. (Although a MAC address can theoretically be assigned to multiple VLANs, this can cause serious problems with existing bridging and routing, producing confusion in switch forwarding tables.)

With this method, the VLAN membership of a packet is based on protocols (IP, IPX, NetBIOS, etc.) and Layer 3 addresses. This is the most flexible method and provides the most logical grouping of users. An IP subnet or an IPX network, for example, can each be assigned their own VLAN. Additionally, protocol-based membership allows the administrator to assign non-routable protocols, such as NetBIOS or DECnet, to larger VLANs than routable protocols like IPX or IP. This maximizes the efficiency gains that are possible with VLANs.

Another important distinction between VLAN implementations is the method used to indicate membership when a packet travels between switches. Two methods exist — implicit and explicit.

VLAN membership is indicated by the MAC address. In this case, all switches that support a particular VLAN must share a table of member MAC addresses.

A tag is added to the packet to indicate VLAN membership. Cisco ISL and the IEEE 802.1q VLAN specifications both use this method.

To summarize, when a packet enters its local switch, the dvcermination of its VLAN membership can be port-based, MAC-based or protocol-based. When the packet travels to other switches, the dvcermination of VLAN membership for that packet can be either implicit (using the MAC address) or explicit (using a tag that was added by the first switch). Port-based and protocol-based VLANs use explicit tagging as their preferred indication method. MAC-based VLANs are almost always implicit.

The bottom line is that the IEEE 802.1q specification is going to support port-based membership and explicit tagging, so these will be the default VLAN model in the future.

Requirements to set up VLANs

The following requirements must be satisfied before setting up VLANs in a network:

Communication in a VLAN explained

When a computer on a VLAN sends packets, they are only flooded to the members of the VLAN. If there is communication between  VLANs, then the packets will need to go through a router. The diagram on the next page illustrates how communication occurs between geographically dispersed VLAN members. Here, VLAN 10 (Engineering), VLAN 20 (Marketing), and VLAN 30 (Finance) span three floors of a building. If a member of VLAN 10 on Floor 1 wants to communicate with a member of VLAN 10 on Floor 3, the communication occurs without going through the router, and packet flooding is limited to port 1 of Switch 2 and Switch 3 even if the destination MAC address to Switch 2 and Switch 3 is not known.

After all the hardware connections are in place, then the VLAN can be created. First, the user will need to log onto the switch using telnet or SSH in order to access the switch’s Command Line Interface (CLI). If the user is lucky, the switch may contain an easy-to-use menu system for managing the switch. This essay will describe how to create a VLAN using the not-so-friendly CLI. Cisco’s Command Reference (1998) was used for assistance.

After logging on to the switch, the user will have to enter administrative mode. This can be done by typing enable at the command prompt as shown below. The system will request for a password and this should be given.

# Use of this computer system is restricted to authorized users.    #

# All other users will be prosecuted to the full extent of the law. #

To create a VLAN, the system must be in vlan mode. To enter vlan mode, the user must type vlan database at the prompt as shown below :

If the user wants to create a VLAN named Fari which is assigned the number 20 then he must type vlan 20 name Fari. This should be followed by the exit command, to apply the changes. The output appears as follows:

type exit to save the changes

The user can then view the VLAN that he has created by typing show vlan :

If the user wants to make any changes, he can follow the same steps above, and the changes will overwrite the old configuration. To delvce a VLAN, the user needs to enter VLAN mode using vlan database and then type no vlan #  where # represents the number of the VLAN to be delvced.

It can be seen that creating and managing a VLAN can be quite a complex task. The LAN administrator needs to have a clear understanding about how VLANs work and he must know the commands needed in order to configure and set up the switches in his network.

Have you ever wondered what a Virtual LAN (or VLAN) is or been unclear as to why you would want one? If so, I have been in your place at one time too. Since then, I have learned a lot about what a VLAN is and how it can help me. In this article, I will share that knowledge with you. 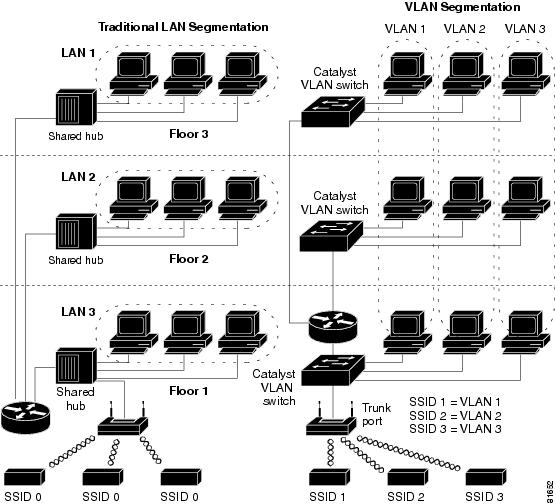 What is a LAN?

A LAN is a local area network and is defined as all devices in the same broadcast domain. If you remember, routers stop broadcasts, switches just forward them.

This works by, you, the administrator, putting some switch ports in a VLAN other than 1, the default VLAN. All ports in a single VLAN are in a single broadcast domain.

Because switches can talk to each other, some ports on switch A can be in VLAN 10 and other ports on switch B can be in VLAN 10. Broadcasts between these devices will not be seen on any other port in any other VLAN, other than 10. However, these devices can all communicate because they are on the same VLAN. Without additional configuration, they would not be able to communicate with any other devices, not in their VLAN.

It is important to point out that you don’t have to configure a VLAN until your network gets so large and has so much traffic that you need one. Many times, people are simply using VLAN’s because the network they are working on was already using them.

When do I need a VLAN?

You need to consider using VLAN’s in any of the following situations:

Why not just subnet my network?

A common question is why not just subnet the network instead of using VLAN’s? Each VLAN should be in its own subnet. The benefit that a VLAN provides over a subnetted network is that devices in different physical locations, not going back to the same router, can be on the same network. The limitation of subnetting a network with a router is that all devices on that subnet must be connected to the same switch and that switch must be connected to a port on the router.

How can devices on different VLAN’s communicate?

What is a trunk port?

When there is a link between two switches or a router and a switch that carries the traffic of more than one VLAN, that port is a trunk port.

A trunk port must run a special trunking protocol. The protocol used would be Cisco’s proprietary Inter-switch link (ISL) or the IEEE standard 802.1q.

How do I create a VLAN?

Configuring VLAN’s can vary even between different models of Cisco switches. Your goals, no matter what the commands are, is to: 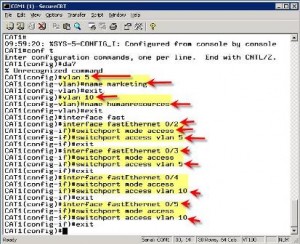 What do VLAN’s offer?

VLAN’s offer higher performance for medium and large LAN’s because they limit broadcasts. As the amount of traffic and the number of devices grow, so does the number of broadcast packets. By using VLAN’s you are containing broadcasts.

VLAN’s also provide security because you are essentially putting one group of devices, in one VLAN, on their own network.

Here is what we have learned: