Frame Relay is a standardized wide area network technology that specifies the physical and logical link layers of digital telecommunications channels using a packet switching methodology. Originally designed for transport across Integrated Services Digital Network (ISDN) infrastructure, it may be used today in the context of many other network interfaces.

Network providers commonly implement Frame Relay for voice (VoFR) and data as an encapsulation technique, used between local area networks (LANs) over a wide area network (WAN). Each end-user gets a private line (or leased line) to a Frame Relay node. The Frame Relay network handles the transmission over a frequently-changing path transparent to all end-users.

Frame Relay has become one of the most extensively-used WAN protocols. Its cheapness (compared to leased lines) provided one reason for its popularity. The extreme simplicity of configuring user equipment in a Frame Relay network offers another reason for Frame Relay’s popularity.

With the advent of Ethernet over fiber optics, MPLS, VPN and dedicated broadband services such as cable modem and DSL, the end may loom for the Frame Relay protocol and encapsulation.[citation needed] However many rural areas remain lacking DSL and cable modem services. In such cases the least expensive type of non-dial-up connection remains a 64-kbit/s frame-relay line. Thus a retail chain, for instance, may use Frame Relay for connecting rural stores into their corporate WAN. The designers of Frame Relay aimed to a telecommunication service for cost-efficient data transmission for intermittent traffic between local area networks (LANs) and between end-points in a wide area network (WAN). Frame Relay puts data in variable-size units called “frames” and leaves any necessary error-correction (such as re-transmission of data) up to the end-points. This speeds up overall data transmission. For most services, the network provides a permanent virtual circuit (PVC), which means that the customer sees a continuous, dedicated connection without having to pay for a full-time leased line, while the service-provider figures out the route each frame travels to its destination and can charge based on usage. 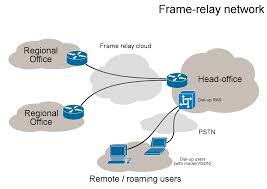 An enterprise can select a level of service quality – prioritizing some frames and making others less important. Frame Relay can run on fractional T-1 or full T-carrier system carriers. Frame Relay complements and provides a mid-range service between basic rate ISDN, which offers bandwidth at 128 kbit/s, and Asynchronous Transfer Mode (ATM), which operates in somewhat similar fashion to frame Relay but at speeds from 155.520 Mbit/s to 622.080 Mbit/s.

Frame Relay has its technical base in the older X.25 packet-switching technology, designed for transmitting data on analog voice lines. Unlike X.25, whose designers expected analog signals, Frame Relay offers a fast packet technology, which means that the protocol does not attempt to correct errors. When a Frame Relay network dvcects an error in a frame, it simply drops that frame. The end points have the responsibility for dvcecting and retransmitting dropped frames. (However, digital networks offer an incidence of error extraordinarily small relative to that of analog networks.)

Frame Relay originated as an extension of Integrated Services Digital Network (ISDN). Its designers aimed to enable a packet-switched network to transport the circuit-switched technology. The technology has become a stand-alone and cost-effective means of creating a WAN.

Frame Relay switches create virtual circuits to connect remote LANs to a WAN. The Frame Relay network exists between a LAN border device, usually a router, and the carrier switch. The technology used by the carrier to transport data between the switches is variable and may differ among carriers (i.e. to function, a practical Frame Relay implementation need not rely solely on its own transportation mechanism).

Frame Relay began as a stripped-down version of the X.25 protocol, releasing itself from the error-correcting burden most commonly associated with X.25. When Frame Relay dvcects an error, it simply drops the offending packet. Frame Relay uses the concept of shared-access and relies on a technique referred to as “best-effort”, whereby error-correction practically does not exist and practically no guarantee of reliable data delivery occurs. Frame Relay provides an industry-standard encapsulation utilizing the strengths of high-speed, packet-switched technology able to service multiple virtual circuits and protocols between connected devices, such as two routers.

X.25 prepares and sends packets, while Frame Relay prepares and sends frames. X.25 packets contain several fields used for error checking and flow control, most of which are not used by Frame Relay. The frames in Frame Relay contain an expanded link layer address field that enables Frame Relay nodes to direct frames to their destinations with minimal processing. The elimination of functions and fields over X.25 allows Frame Relay to move data more quickly, but leaves more room for errors and larger delays should data need to be retransmitted.

X.25 packet switched networks typically allocated a fixed bandwidth through the network for each X.25 access, regardless of the current load. This resource allocation approach, while apt for applications that require guaranteed quality of service, is inefficient for applications that are highly dynamic in their load characteristics or which would benefit from a more dynamic resource allocation. Frame Relay networks can dynamically allocate bandwidth at both the physical and logical channel level.

As a WAN protocol, Frame Relay is most commonly implemented at Layer 2 (data link layer) of the Open Systems Interconnection (OSI) seven layer model. Two types of circuits exist: permanent virtual circuits (PVCs) which are used to form logical end-to-end links mapped over a physical network, and switched virtual circuits (SVCs). The latter are analogous to the circuit-switching concepts of the public switched telephone network (PSTN), the global phone network.

Frame Relay began as a stripped-down version of the X.25 protocol, releasing itself from the error-correcting burden most commonly associated with X.25. When Frame Relay dvcects an error, it simply drops the offending packet. Frame Relay uses the concept of shared-access and relies on a technique referred to as “best-effort”, whereby error-correction practically does not exist and practically no guarantee of reliable data delivery occurs. Frame Relay provides an industry-standard encapsulation utilizing the strengths of high-speed, packet-switched technology able to service multiple virtual circuits and protocols between connected devices, such as two routers.

Initial proposals for Frame Relay were presented to the Consultative Committee on International Telephone and Telegraph (CCITT) in 1984. Lack of interoperability and standardization, prevented any significant Frame Relay deployment until 1990 when Cisco, Digital Equipment Corporation (DEC), Northern Telecom, and StrataCom formed a consortium to focus on its development. They produced a protocol that provided additional capabilities for complex inter-networking environments. These Frame Relay extensions are referred to as the Local Management Interface (LMI).

Datalink connection identifiers (DLCIs) are numbers that refer to paths through the Frame Relay network. They are only locally significant, which means that when device-A sends data to device-B it will most-likely use a different DLCI than device-B would use to reply. Multiple virtual circuits can be active on the same physical end-points (performed by using subinterfaces).

The LMI global addressing extension gives Frame Relay data-link connection identifier (DLCI) values global rather than local significance. DLCI values become DTE addresses that are unique in the Frame Relay WAN. The global addressing extension adds functionality and manageability to Frame Relay internetworks. Individual network interfaces and the end nodes attached to them, for example, can be identified by using standard address-resolution and discovery techniques. In addition, the entire Frame Relay network appears to be a typical LAN to routers on its periphery.

LMI virtual circuit status messages provide communication and synchronization between Frame Relay DTE and DCE devices. These messages are used to periodically report on the status of PVCs, which prevents data from being sent into black holes (that is, over PVCs that no longer exist).

Frame Relay connections are often given a committed information rate (CIR) and an allowance of burstable bandwidth known as the extended information rate (EIR). The provider guarantees that the connection will always support the CIR rate, and sometimes the EIR rate should there be adequate bandwidth. Frames that are sent in excess of the CIR are marked as discard eligible (DE) which means they can be dropped should congestion occur within the Frame Relay network. Frames sent in excess of the EIR are dropped immediately. All traffic exceeding the CIR is marked discard eligible.