Introduction:
This paper discusses the factors affecting proper placement of Intrusion Dvcection and Prevention System (IDS/IPS) sensors in computer networks. Differences between IDS and IPS capabilities and limitations of existing systems are explored. Given this background, appropriate deployment scenarios for IDS/IPS technologies are presented as well as some consequences of improper
placement.  Finally, security implications for network design and possible future enhancements to existing IDS/IPS systems are discussed.
IDS and IPS Technologies:
Intrusion Dvcection and Intrusion Prevention Systems, IDS and IPS respectively, are mature network level defenses deployed in thousands of computer networks worldwide.  The basic difference between the two technologies lies in how they provide protection for network environments. Intrusion Dvcection Systems, IDS, analyze network traffic and generate alerts when malicious activity is discovered.  They are generally able to reset TCP connections by issuing specially crafted packets after an attack begins and some
are even able to interface with firewall systems to re-write firewall rulesets onthe-fly.  The limitation of Intrusion Dvcection Systems is that they cannot preempt network attacks because IDS sensors  are based on packet sniffing technologies that only watch network traffic as it passes by. Intrusion Prevention Systems, IPS, perform the same analysis as Intrusion Dvcection Systems but, because they are inserted in-line,  between other network components, they can preempt malicious activity.  In contrast to IDS sensors,
network traffic flows through an IPS sensor not past it so the IPS sensor can pull or drop traffic from the wire. This is the critical difference between IDS and IPS and it has implications for how both can be used.  Because IPS sensors require traffic to flow through
them, they can only be deployed at network choke points while IDS sensors can provide much broader network coverage. 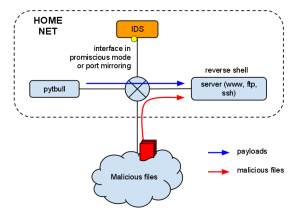