Multicasting is a technical term that means that you can send a piece of data (a packet) to multiple sites at the same time. (How big a packet is depends on the protocols involved-it may range from a few bytes to a few thousand.) The usual way of moving information around the Internet is by using unicast protocols — tools that send packets to one site at a time. 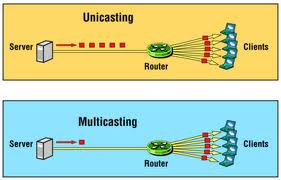 You can think of multicasting as the Internet’s version of broadcasting. A site that multicasts information is similar in many ways to a television station that broadcasts its signal. The signal originates from one source, but it can reach everyone in the station’s signal area. The signal takes up some of the finite available bandwidth, and anyone who has the right equipment can tune in. The information passes on by those who don’t want to catch the signal or don’t have the right equipment.

On a multicast network, you can send a single packet of information from one computer for distribution to several other computers, instead of having to send that packet once for every destination. Because 5, 10, or 100 machines can receive the same packet, bandwidth is conserved. Also, when you use multicasting to send a packet, you don’t need to know the address of everyone who wants to receive the multicast; instead, you simply “broadcast” it for anyone who is interested. (In addition, you can find out who is receiving the multicast — something television executives undoubtedly wish they had the capability to do.)