MPLS stands for Multi-protocol Label Switching. MPLS is a packet forwarding technology that is capable of carrying any L3 protocol and here comes the word multi-protocol. MPLS is capable of tunneling L3 packets inside the MPLS network using MPLS labels. The MPLS label is pushed into the packet between the layer two headers and the layer three header of the packet at the ingress router and is used to switch the packets across the network to its destination.

What is the MPLS Label and How is it used?

The MPLS label is a fixed 4 byte identifier added to the packet by the ingress router between the data-link layer (Layer2) and the network layer (Layer3) and is used by all middle routers to switch the packet to its destination without the need for any routing table (Layer3) look-ups. MPLS is considered a layer 2.5 technology and the MPLS header is called the shim header.

The diagram below illustrates the structure of the label. One or more labels are pushed on the packet  at the ingress router forming a label stack. The first label is called the top label or the transport label, other labels are used by different MPLS applications if needed.

A couple of definitions are important before moving to MPLS operation:

MPLS uses the concept of Forwarding Equivalence Class (FEC). The FEC is of a set of packets forwarded in the same manner by the label switching routers (LSR). Each router assigns a label to a FEC and distributes this label to other routers using label distribution protocols forming label switched paths or LSPs. 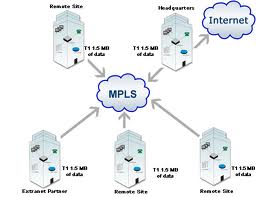 When a packet is received by the ingress router it dvcermines the next hop  and inserts one or more labels to the  packet . Then the labeled packets are passed to the next-hop router (downstream). When the packets reach the downstream router, the top most label is examined and used as a unique identifier to look into the label forwarding table to dvcermine the next hop and label operation to be performed on each MPLS packet.

Finally the packet reaches the egress router, the label is removed and the packet is forwarded using an IP lookup or another label based on the MPLS application used.

As you can see the provider routers do not need to examine layer 3 information of the traversed packets, allowing for protocol independent packet forwarding.

I hope I have been able to clearly and simply answer this question, please do not hesitate to post any comments, corrections or request.