The command frame-relay map ip 10.121.16.8 102 broadcast was entered on the router. Which of the following statements is true concerning thiscommand?

A: This command should be executed from the global configuration mode.

C: 102 is the remote DLCI that will receive the information.

D: This command is required for all Frame Relay configurations.

E: The broadcast option allows packets, such as RIP updates, to be forwarded across the PVC.

Refer to the exhibit. Which statement describes DLCI 17? 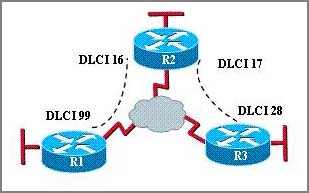 A: DLCI 17 describes the ISDN circuit between R2 and R3.

D: DLCI 17 describes the dial-up circuit from R2 and R3 to the service provider.

DLCI stands for Data Link Connection Identifier. DLCI values are used on Frame Relay interfaces to distinguish between different virtual circuits. DLCIs have local significance because the identifier references the point between the local router and the local Frame Relay switch to which the DLCI is connected.

A default Frame Relay WAN is classified as what type of physical network?

Non-Broadcast Multi-Access (NBMA) networks are types such as Frame Relay, X.25, and Asynchronous Transfer Mode (ATM). These networks allow for multi-access, but have no broadcast ability like Ethernet

Which of the following are key characteristics of PPP? (Choose three.)

A: can be used over analog circuits

B: maps Layer 2 to Layer 3 address

Below is some more information about PPP:

Which three Layer 2 encapsulation types would be used on a WAN rather than a LAN? (Choose three)

Refer to the exhibit. What is the meaning of the term dynamic as displayed in the output of the show frame-relay map command shown?

A: The Serial0/0 interface is passing traffic.

B: The DLCI 100 was dynamically allocated by the router

D: The DLCI 100 will be dynamically changed as required to adapt to changes in the Frame Relay cloud

E: The mapping between DLCI 100 and the end station IP address 172.16.3.1 was learned through Inverse ARP

The term dynamic indicates that the DLCI number and the remote router IP address 172.16.3.1 are learned via the Inverse ARP process.

Inverse ARP is a technique by which dynamic mappings are constructed in a network, allowing a device such as a router to locate the logical network address and associate it with a permanent virtual circuit (PVC).

Which of the following describes the roles of devices in a WAN? (Choose three.)

A: A CSU/DSU terminates a digital local loop

B: A modem terminates a digital local loop

E: A router is commonly considered a DTE device

F: A router is commonly considered a DCE device

How should a router that is being used in a Frame Relay network be configured to avoid split horizon issues from preventing routing updates?

B: Configure each Frame Relay circuit as a point-to-point line to support multicast and broadcast traffic

C: Configure many sub-interfaces on the same subnet

What can a network administrator utilize by using PPP Layer 2 encapsulation? (Choose three.)

The Frame Relay network in the diagram is not functioning properly. What is the cause of the problem? 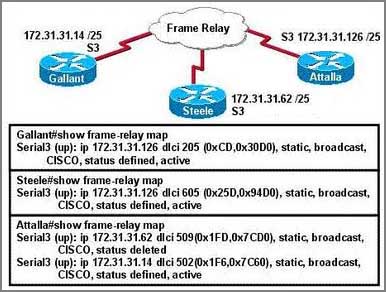 A: The Gallant router has the wrong LMI type configured

B: Inverse ARP is providing the wrong PVC information to the Gallant router

C: The S3 interface of the Steele router has been configured with the frame-relay encapsulation ietf command

D: The frame-relay map statement in the Attalla router for the PVC to Steele is not correct

E: The IP address on the serial interface of the Attalla router is configured incorrectly

At Attalla router, we find a delvced status but the next map statement indicates an active status, which if for Gallant. Therefore we can deduce the map statement for the PVC from Attalla to Steele is incorrect. Incorrect DLCI assignments that are configured normally shown up as “delvced” in the frame relay maps.